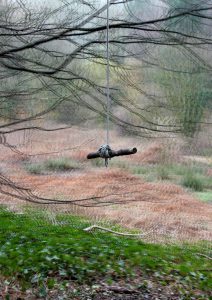 Jack Brown works across a range of media including drawing, sculpture and video as well as  site-specific interventions.  For You Belong Here, Jack has been exploring many of the 70 parks and green spaces across the city. With an interest in ‘avoidance strategies’ – both as a preferred way of working as well as a response to coronavirus guidance – Jack has been seeking out more unusual ways of navigating these spaces, for instance, visiting during bad weather, and following the ‘unofficial’ paths of desire lines: ‘the linear dent in the grass, the holes in the fence, the tracks through the brambles…’

About the artist:
Jack works across a range of mediums and methodologies. His work focuses on the ‘overlooked, things that should be given more than a passing glance, moments that would benefit from magnification’. The works he makes are often found, realised, made or placed in the public realm. He also works collaboratively, leading on public realm projects and facilitating artist networks. His practice can be seen as an investigation into ways of making, and how those made objects or moments interact with the world around them.

Jack has exhibited in solo and group shows across the North West, and his work is in a number of private collections in the UK. He has a studio at Paradise Works.