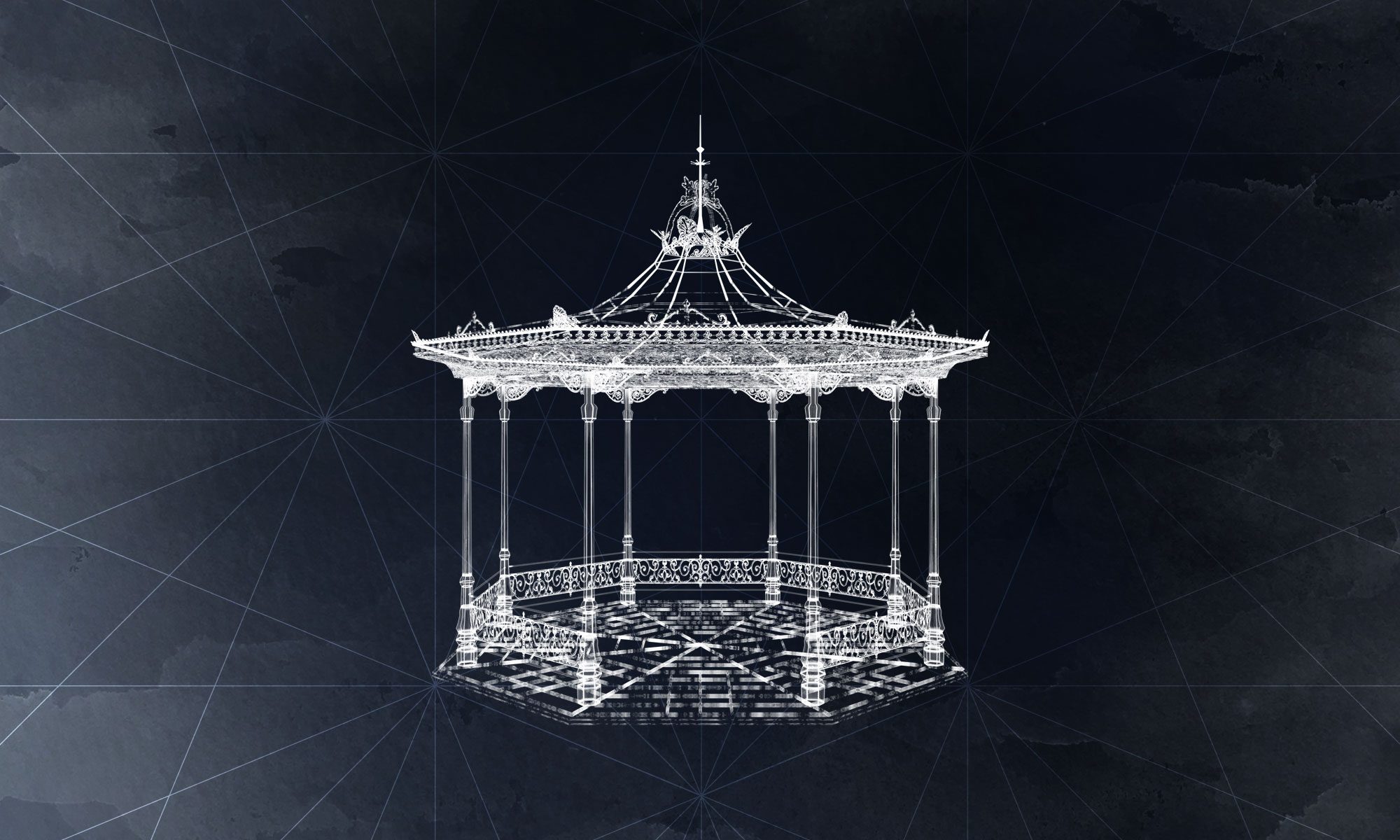 Commissioned by the University of Salford Art Collection and Metal, The Storm Cone is an immersive artwork by artist Laura Daly with music composed by Lucy Pankhurst, which reveals the lost bandstands in our municipal parks and explores their forgotten histories.

At its centre is a journey through music and sound that considers our relationship with the past, while charting the fading away of brass bands during the interwar years (1918 – 1939).  Augmented Reality allows the visitor to witness the ‘skeleton’ of a traditional bandstand as they experience the music.

The Storm Cone, launching 29 May 2021, is experienced in the park setting, through a free app and using headphones. Initially it immerses the visitor in the 360˚ sound of a band performing as a full ensemble in the park. Moving amongst the absent bandsmen, the audience will hear the detail of every instrument, before following the departed musicians into eight spatial sound works, where solo musical phrases merge into new environments. An offsite version will also be available on the project’s dedicated website, making The Storm Cone widely available.

The Storm Cone will be located where the bandstand once stood in Peel Park, Salford. It will also be presented at the site of the lost bandstand in Chalkwell Park, Southend as part of Estuary 2021, and as a new permanent addition to Metal’s NetPark digital project.

The music for The Storm Cone is a newly commissioned composition. Lucy Pankhurst worked closely with Laura Daly to evolve musical themes and phrases that reflect the artist’s ideas and narrative for the overall project. She has created an innovative and contemporary score that utilises sound spatialising technologies to move music around the listener; with instruments calling and responding across the ‘bandstand’. The resulting piece is sculptural in its approach.

Students, staff and friends of The University of Salford performed and recorded the commission. For many of the younger musicians it was their first recording session. It was the only live music performance at the University, during a year of Covid restrictions. The sound works bring together vocal contributions from a wide range of people including the University’s drama and music students and Manchester choir, Chorus of Others.

The title of the work comes from Rudyard Kipling’s 1932 poem that forewarned of the Second World War. It considers key aspects of the interwar period and the ensuing break-up and reshaping of communities. Serving as warning shot, The Storm Cone contemplates the residual impact of this time and the cyclical nature of history in terms of current events, including the economic downturn and rise of populism, extremism, racism and antisemitism; problems now seemingly exacerbated by the Covid-19 pandemic. It is also a commemoration of creative legacy. The resulting experience is an artwork that is imbued with a sense of both loss and celebration, underlining human strength and fragility.

In Salford, The Storm Cone is presented at Peel Park as part of Rediscovering Salford, a city-wide programme which highlights and celebrates Salford’s green spaces – inspired by the launch of RHS Garden Bridgewater in May 2021– The Storm Cone is presented alongside You Belong Here: Artists Rediscovering Salford’s Green Spaces, a new exhibition at Salford Museum & Art Gallery which will show four new artists’ commissions alongside original archive material, photographs and historic artworks from the Museum, University of Salford and The Lowry. Together, they rediscover some of the city’s unique history – and overlooked stories – as well as offering new narratives about our local environments.

The Storm Cone is commissioned through a partnership between University of Salford Art Collection and Metal in collaboration with Salford Culture and Place Partnership on the occasion of Rediscovering Salford. Generously supported using public funding by the National Lottery through Arts Council England. Also supported by PN Daly Ltd and Zinc and Copper Roofing.

In October 2021 @annaridler sat down to discuss her AI work ‘Circadian Bloom’ with writer Georgia Ward Dyer and Sylvia Travers from @RHSBridgewater. These #rediscoveringsalford talks are now available to watch online!

Come and Say 'Hi', We are at the #RediscoveringSalford event with @SalfordUni until 7pm celebrating 'Our Park' the graphic novel we created with students and staff from the University.

Head to https://www.eventbrite.co.uk/e/salford-rediscovered-join-the-party-tickets-317570681457 for more info

Come and JOIN THE PARTY today at #Crescent #Salford 🎪

Over 20 installations and events with live music 🎵Food & Drink 🍕